Life in Hong Kong is different. It is one of the most crowded places in the world with a population density of around 6,700 persons per square kilometre – more than four times that of London. High-rise apartments, magnificent panoramic views, a super-fast metro and shops to die for are the order of the day.

At the water front stands the modern, imposing Hong Kong Cultural Centre, a multipurpose performance facility opened in 1989 by Charles, Prince of Wales and Princess Diana. The magnificent space-age structure contains a concert hall, grand theatre, studio theatre, exhibition gallery, four foyer exhibition areas, and 11 rehearsal and practice rooms. This is the home of the Hong Kong Philharmonic Orchestra; it is recognised as Asia’s foremost classical orchestra and presents more than 150 concerts to 200,000 music-lovers annually. 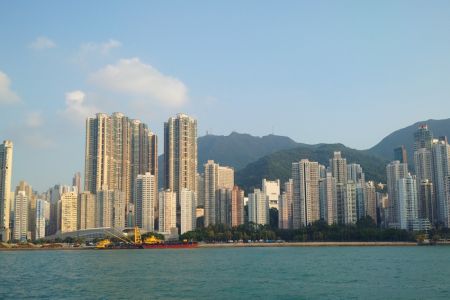 So why would the Hong Kong Philharmonic Orchestra be using the facilities offered by Peregrine’s Pianos, nearly 6,000 miles away in London?

There are now 96 players in the regular employ, and for the orchestra to feature on the international stage every player must be at the top of his or her game. If a vacancy should arise, a replacement of equal international quality must be selected. Under Jaap van Zweden, the Orchestra’s Music Director, the orchestra has toured China, Taiwan and Europe and has ambitious plans for the future.

During my visit this month to Hong Kong I heard their “Three Glorious Romantics” programme in the Hong Kong City Hall. Kenny Chen, the Director of Orchestral Operations, explained that all vacancies are now filled and I learned that players have come from America, Europe and Asia. 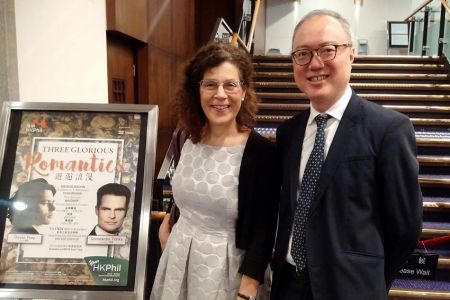 Kenny (pictured above with Dawn Elizabeth Howells) conducted auditions in June in Hong Kong but also auditioned in New York and at Peregrine’s Pianos in London. The London auditions attracted musicians from all over Europe, and several players were subsequently invited to attend second-round auditions in Hong Kong.

It was important to hear prospective candidates live and Kenny had appreciated the facilities at Peregrine’s Pianos. He needed a professional environment, a good-sized audition room with good acoustic and no distractions, and he needed somewhere for the players to warm up before entering the audition room.

Edward Ng, on the Board of Governors for the orchestra, was keen to stress to me that no orchestra needed too many changes of its players. Asia, he said, is a growth market, citing the fact that music is compulsory in Asian schools but no longer so in European or American schools. There is much outreach work being done and youngsters are offered a “Young Audience Scheme”. 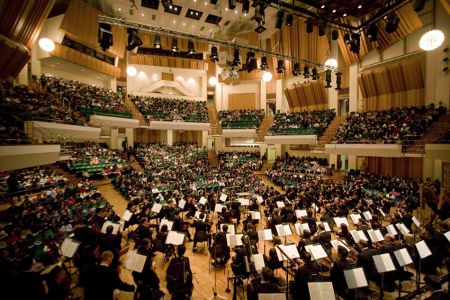 In the all-German programme of the performance I attended I was struck by the rich cultural diversity of the players and very much aware of the freshness and commitment that this fine orchestra demonstrated. I am sure that we will not be seeing them again at Peregrine’s Pianos for a few years, but will look forward to it just the same!

Footnote: Auditions can be conducted at Peregrine's Pianos both effectively and professionally. We have a large, comfortable, soundproofed audition room with high-calibre concert piano, and a choice of one or two warm-up rooms. Pianos in all rooms are tuned regularly and kept at the same pitch.