How the Piano got its Shape

As a pianist, it is too easy to sit at the piano and take its inner workings for granted: in my years of training, there were very few times where we even lifted the lid. Benedetti Michaelangeli, however, was a legendary pianist who was known for taking his piano apart and putting it back together again. He must have been a very enlightened teacher!

My first opportunity to visit a Piano Factory was in September this year with Peregrine’s Pianos staff, technicians and students. We went to Brauschweig for the day which meant a very early start, but as we left Heathrow despite how tired we felt, there was still a great deal of excitement amongst the group.

The Schimmel Factory is near the busy town centre, is purpose-made for piano production, and was completed in 1975. It occupies a vast site of about 6,000 square meters, and within just a few years of opening it was producing some 10,000 pianos per year. A large Schimmel logo is emblazened across the front of the building; an inspiring sight to say the least.

A unique, glass grand piano features in the front lobby, an unusual but magnificent spectacle on which I could imagine playing some piano transcription of A Space Odyssey or George Crumb’s Makrokosmos on! It was the first photoshoot of the day for everyone. 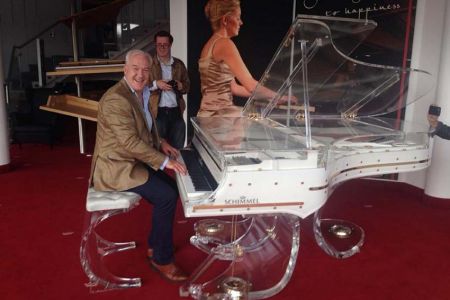 From the lobby we walked straight into the concert hall, where there were numerous Schimmel upright pianos neatly lined up, and two enormous Konzert grand pianos centre-stage. In the selection room there were more grand pianos to be seen – small, medium, large and very large! No two pianos are the same, so these selection rooms provide the opportunity for serious piano purchasers to make their most suitable choice.

Other piano manufacturers have kept to their production methods. However, in an introductory talk before entering the factory proper, we were told that Schimmel have a policy of continual development. There is high security in place in the production plant, and photography was strictly prohibited. Walking in I was immediately struck by the size of the factory; the ceilings were high, and there was an incredible amount to see.

The grand piano’s shape is a very elegant one and our first ‘stop’ showed us exactly how this shape is achieved. We saw twenty or more strips of veneer waiting to be glued together, put into vast jigs and heat-treated. We were told that the wood only stays in the jigs for a couple of hours, after which it keeps its shape forevermore. Later, we saw the frame and soundboard being assembled into these cases. Being able to see all of this brought about an awareness of just how much woodwork goes into the construction of a piano.

The metal frame is cast in a different part of Germany, but in the factory we watched as it was sprayed a golden colour, rubbed down by hand, and then sprayed again before being left to harden. It is obvious that a huge amount of effort is put into making the piano look good as well as sound good. Once the metal frame is assembled it starts to look extremely heavy, and more like the piano we know.

We arrived at the stringing room, where large hydraulic machines insert tuning pins and the piano wires into the wrestplank. Everything is very clean, and the workmen have to wear gloves at all times. The piano is then tuned, but only roughly(!)

I was surprised to see that after all the strings had been fitted and everything inside seemed finished, the frame, strings, and all internal parts were covered up with lining paper. This was so that the piano could be wheeled over to the polyester shop for its casework to be completed. It has several coats, and is extensively rubbed down and buffed between each coat. The final gloss is a lovely shine, as reflective as a bathroom mirror.

A large workshop is assigned solely to the making of piano keys. Here we see wooden planks which get key coverings glued on, holes drilled, and felt inserted at various points. They are then cut into strips to form the piano keys. Every key is checked and rubbed down by hand – a real labour of love – before being assembled into the keybed and lined up with the action components. The technicians certainly demonstrated an enormous amount of skill.

Schimmel are well-known for their Computer Aided Piano Engineering (CAPE) and we were told that their design room is full of computers. Around the factory, however, not a computer was to be seen (nor even a mobile phone): the technicians had to organise the parts and different components in their minds, without computers. 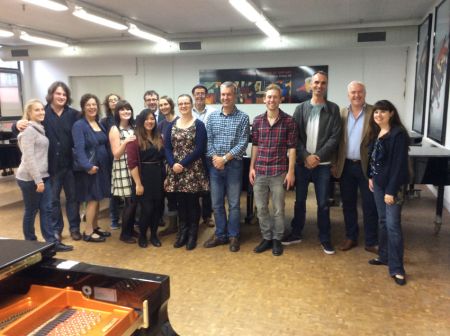 We were taken into a toning booth, an oasis of silence, and a solitary technician who only spoke German welcomed us. He did not seem to mind our party of 15 people descending on him, and was happy to show us his work on the hammers. He used fine sandpaper to achieve the perfect nose shape on each hammer, and explained that he was able to create softer sounds, or even harder sounds through manipulation of the hammer felt.

In one remote corner of the factory, we saw Schimmel’s prestige Pegasus grand piano in production. It looks like an all-in-one catsuit and lavishly exaggerates the elegant curves of an ordinary grand piano. Naturally, it is aimed at extremely wealthy customers with only a few being made each year. Call me traditional if you like, but I think I would rather invest my money in the traditional grand!

We arrived at the twin-tone bench, where pianos have their silent action fitted. All the keys are taken out to install the sensors, which are connected to a discreet digital box mounted under the keybed. It is operated simply by using the middle pedal.

In the finishing room we were once more allowed to take photographs. In here the whole range of completed upright and grand pianos awaited their final inspection. It was enlightening to see how clean and efficient a modern factory can be, and Schimmel’s refreshing openness to change and willingness to embrace the future was an inspiration for me. I may not be able to take a piano apart and reassemble it like the great Michaelangeli, but after seeing the factory I can certainly appreciate the piano and everything inside it just as much.