In the early hours of Saturday morning (13th April) Dawn Elizabeth Howells, proprietor of Peregrine’s Pianos, and I flew to Germany for the biennial Schimmel Pianos Worldwide Dealers’ Meeting. Held in Schimmel’s hometown of Braunschweig, near Hannover, the event was arranged to coincide with the end of the Frankfurt Music Trade Fair, at which piano dealers from all over the world gather each year. Schimmel only make an appearance at the fair every other year, alternately preferring to welcome dealers to their Braunschweig headquarters instead. Given the excitement contained in the invitation – “The only thing constant in life is change”- we were curious to discover what news the Schimmel family had for us. We certainly weren’t to be disappointed! 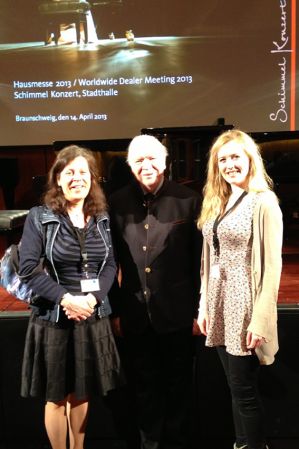 The three-day dealers’ meeting officially began with a welcome soirée at the Schimmel Selection Centre, where we mingled and caught up with other Schimmel piano dealers. From California to China, Norway to New Zealand, Russia to Rhode Island, the presence of dealers from across the globe was testament to Schimmel’s international renown and success. Local jazz trio “The New Braunschweig Connection” provided super background entertainment and the reception was a relaxing and enjoyable start to a busy business event.

Schimmel had promised us the unveiling of two new generations of grand pianos for the Schimmel Konzert and Schimmel Classic series. On the Sunday morning we were whisked off to the Stadthalle (town hall) for the first installment of the weekend’s programme. The flamboyant Schimmel President Hannes Schimmel-Vogel began by welcoming us all. He presented a report which included an explanation of polyester problems which had held up production.

He then went on to present the new range of six Konzert grand pianos, patented under the new name the ‘Unique Schimmel Konzert Concept’, which refers to the fact that all these grand pianos share the same design. The new Konzert series pianos (i) have newly designed technical specifications, (ii) are built with new methods, (iii) utilise new voicing methods and (iv) have completely new keyboard and action dimensions.

We were then treated to a half-hour recital by pianist Gabriele Leporatti on the Schimmel K280 piano, which highlighted the range of colour and expression achievable on such a fine instrument. After this, Gabriele played other manufacturers’ pianos alongside the Schimmel in a comparison exercise. To conclude, dealers were given the opportunity to play the new models. 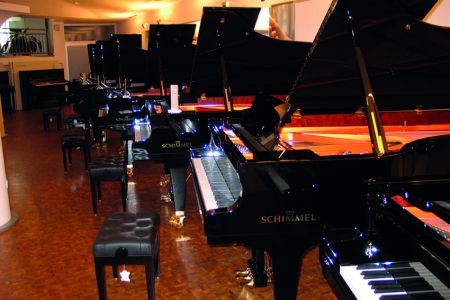 After a light lunch the afternoon continued back at the Schimmel headquarters, where Hannes Schimmel-Vogel now introduced us to the new Classic series grand pianos - the pianos recommended for “professional practice.” Here, new technologies are also being incorporated and the present range of two instruments has been increased to three. Again we were encouraged to try the pianos for ourselves which the dealers took to with relish!

Then came the announcement which we had all been awaiting. Schimmel have created two completely new product lines: ‘Schimmel International’, made in Braunschweig, and ‘Wilhelm Schimmel’, made in Europe. The pianos in these series are high value instruments and have been introduced as part of Schimmel’s initiative to gain more market share in the middle and upper entry levels of the market. They are keen to demonstrate that German instruments can embrace wide budget requirements. The ‘Vogel by Schimmel’ series has accordingly been discontinued and the ‘May Berlin’ is out of production for the time being. 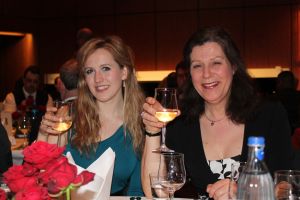 We learned that these are the most substantial changes to be made to Schimmel’s product ranges since the very introduction of the Konzert series in 2000. The latest development means that Schimmel now covers a far bigger market range of pianos. Schimmel Konzert, Schimmel Classic and Schimmel International will all carry the BVK ‘Made in Germany’ certificate of authenticity and Wilhelm Schimmel will have the BVK ‘Made in Europe’ certificate.

There was a considerable amount of respect for the fact that Schimmel Pianos are embracing the future so whole-heartedly. These huge changes were received with enthusiasm and dealers were immediately keen to know when the new products would be available for shipping.

We had a lot to celebrate and the formal Gala Dinner that evening, held again at the Stadthalle, was a fitting occasion to do just this. We enjoyed a buffet-style banquet and the wine was free-flowing. We toasted the Schimmel family and the fruition of several years’ work, research and development. It was especially nice that both Hannes Schimmel-Vogel and his father-in-law and former Schimmel President Nikolaus W. Schimmel, with whom Dawn and I had several pleasant conversations, were both present over the whole dealers' meeting.

Listening again to background jazz piano made me keen to join in and, having mentioned this to Dawn, I was straightaway introduced to the New York dealer and accomplished jazz pianist Vladimir Zaslavsky. Before I knew it we were taking to the stage to perform the classic ‘Autumn Leaves’ before the whole gathering of dealers. 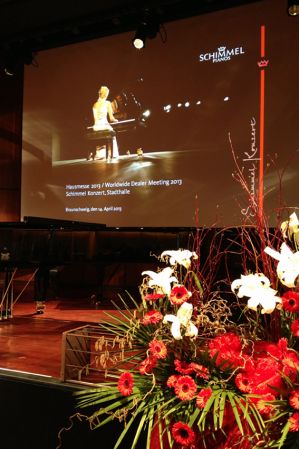 The dealers’ meeting was, however, not yet over and the following morning a tour of the Schimmel factory gave us a chance to witness firsthand the care, craftsmanship and creativity that go into the manufacture of Schimmel pianos.

As we were guided through the numerous different work areas of the factory, the expertise of each employee in their specific field was evident. It is only when you see so many people working on so many parts of a piano that you realise how sophisticated these instruments are and how important it is to have the whole team working to high standards. Certainly there are some machines but I was amazed by how much of the work had to be done by hand.

Before we returned to the airport for our flight home, Dawn and I had a few hours at our disposal and we took this opportunity to explore the Old Town and to visit the local landmarks, including the extraordinary Schlossarkade, a former palace which has retained its exterior appearance but which has been converted into a huge modern shopping centre on the inside. In the middle of the shopping centre is a large Schimmel Konzert grand piano, demonstrating that the people of Braunschweig appreciate one of the important things that the city stands for. We returned to England uplifted, inspired and even more enthusiastic advocates of Schimmel Pianos.