When the Peregrine’s Pianos team were invited to the Schimmel Pianos dealers meeting we wasted no time in signing up! Arranged, as in earlier years, to procede the Frankfurt Music Trade Fair we were in Braunschweig for three days from Sunday 2nd April.

To be sure, there have been numerous developments at the factory – and Schimmel perhaps more than any other piano company have continued to plan ahead. This meeting was billed as the forum for the introduction of new models and also to explain the new strategic alliance between Schimmel and Pearl River. We were on an early flight out of London which allowed time for a traditional German Sunday lunch at “Mutter Habenicht” – a rustic and charming German restaurant established in 1870.

Then at the Schimmel factory we met with dealers from around the world over drinks and a buffet supper. Musically we were spoilt by jazz piano music played by Otto Wolters, Germany’s first professor for jazz piano. These flower centrepieces reminded us all that pianos were going to remain centre stage through the next few days!

Monday morning saw over a hundred dealers from Europe, America, China and Australia, but it was noted that the dealer from New Zealand had travelled the furthest. The company president, Hannes Schimmel-Vogel, greeted the gathering switching fluently between German and English.

We learned that in changing times Schimmel had concluded the alliance with the Pearl River factory in Guangzhou, China – the largest piano factory in the world. Some 80% of all pianos sold in the world are sold in China and before the alliance Schimmel had the odds stacked against it. An address by senior Pearl River management assured us that there would be no change to the current situation: with a German management team and products made 100% in Germany.

This positive news was swiftly followed by a general summary of changes to the product range. Endeavours to meet competitive product prices without compromising standards are a constant challenge. Schimmel are proud to qualify for the BVK (German Piano Maker Association) accreditation, the strict guidelines of which stimulate customer confidence. 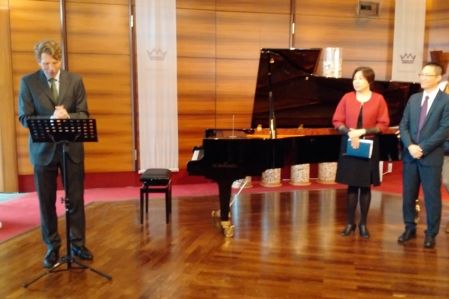 During a further seminar later in the morning, Lothar Kiesche, Head of Sales and Marketing, outlined in detail the changes in product lines. The Schimmel International range were to be withdrawn as it had not proved possible to make the instruments at the all-important price point in Germany. A new range of instruments made in Schimmel’s Polish factory were introduced to compliment the Wilhelm Schimmel range. These pianos, called the Wilhelm Academy, were aimed at institutional use and featured quality German-made Renner actions.

The major excitement however came with the announcement of a new product designed in Germany but manufactured according to strict guidelines in the Pearl River factory. These Fridolin Pianos are named after Wilhelm Schimmel’s brother, Fridolin Schimmel, and are priced below the current Wilhelm Schimmel pianos.

Many dealers were interested in the Schimmel Twintone, the digital-age integrated piano, and dealers will be given an option to be part of a special price promotion here. In recent years Schimmel have made large numbers of instruments in black polyester, and now there are plans afoot to reintroduce the exotic wood finish options. 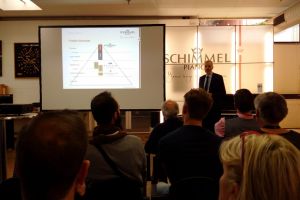 Monday evening was a formal dinner of generous proportions, and even some light entertainment! The dealer meeting, with workshops about product quality and marketing, also included opportunities to test and savour the new product lines. It demonstrated to all that Schimmel Pianos has a clear vision for the future and is well prepared for an ever-changing market place.