Peregrine's Pianos is proud to be the exclusive dealer in London for August Förster pianos. They are made completely in Germany and are the antidote to modern factory-made pianos. The first glance at any new August Förster grand or upright piano is pleasing: gone is the mighty oversized instrument of yesteryear Germany, and in its place we have style and proportions to grace any home.

"We recently bought a new August Förster from Peregrines to install in one of our main one-to-one teaching studios. It's a very popular piano with both students and staff. The action in particular is excellent but the whole piano is of very high standard and is holding up very well to the heavy use it receives at the university. Peregrines were very helpful and I'd definitely recommend them to private buyers or institutions." David Clements, Senior Technician at Middlesex University Music Department. [The university later bought three more instruments]

Tucked away in a quiet corner of Saxony is Löbau, a small town dating back at least to 1221. With a population of fewer than 15,000, Löbau is rich in traditions and many of its population are highly skilled craftspeople. It was here in 1859 that Friedrich August Förster, having completed a three year apprenticeship as a cabinet maker and spent his leisure time repairing musical instruments, built his first piano and established his piano business. 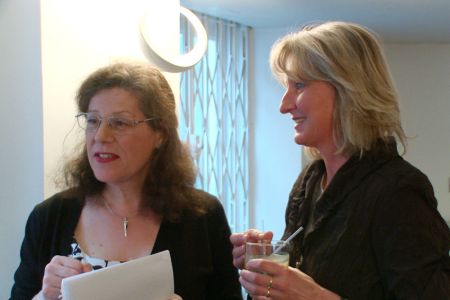 When August Förster died in 1897 the company was passed down through the generations. In the intervening years the world has become a very different place and building quality pianos in a socialistic economy presented numerous problems. The collapse of the government of the German Democratic Republic, however, allowed the family business once more to flourish and today, under the Directorship of Annekatrin Förster (fifth generation), the company enjoys new life energy. Indeed August Förster is now ranked as one of the world’s finest pianos.

Annekatrin - pictured here with Dawn Elizabeth Howells - is a thoroughly sincere and modest lady passionate about carrying forward her family’s inheritance for future generations. As a working mother and business director she is not only dedicated to nurturing the refined talents of her forty craftsmen strong workforce, but also keeping them together as a family united by the love of music. The company now produce just a few hundred pianos annually; the instruments are hand crafted and time honoured traditions are the hallmark. 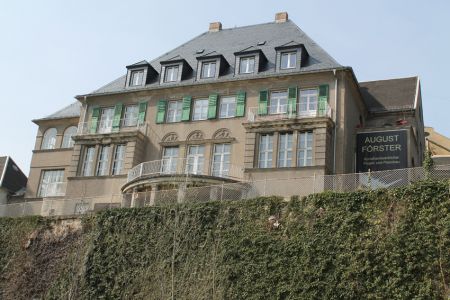 Each instrument consists of more than 12,000 parts combined into a masterpiece of precision. It takes thousands of steps, including secrets learned and passed down through generations, and many months to build a piano of such outstanding style and quality.

The warm, mellow tone is characteristic of August Förster pianos and is what we have come to expect of a company with long experience. The carefully crafted soundboard is of a unique design and the strong cast iron frame can withstand a string tension of up to 20 tons (this was patented by Mr August Förster as early as 1866). For improved tuning stability the frame has additional back posts. The action is made by Renner, the same as found in high quality instruments the world over.

2019 was a special year for August Förster pianos, as it was the year when they celebrated 160 years of trading. The year also saw the completion of refurbishment works in the factory, a programme on MDR (German TV) early in the year, a factory open day in April that saw 1,200 visitors, and displays at both the Saxony Festival in June and the Leipzig Music Festival in November.

"The conductor’s suite has an August Förster grand piano that gave a particular pleasure: refined tone, excellent action and a sense that this was a piano completely at home in this beautifully designed and quality constructed concert hall. I was so comfortable with the responsive and artistically satisfying instrument.” James Lisney, November 2016 performing in the Leipzig Gewandhaus

“I've never played the August Förster grand piano before and I was very impressed. The piano has a crisp, accurate and responsive touch and is sonorous and brilliant in all registers. But the piano also has a welcome delicacy. I found it a great asset when performing pieces from Messiaen's Catalogue d'oiseaux, a work that explores all the possibilities of piano colouring, ranging from the incisive articulation of birdsong to Messiaen's glowing evocations of landscape, water, sunrise and sunset. The piano was splendid. Thank you so much.” Peter Hill, January 2017 performing in Görlitz, Saxony

Scottish Opera in Glasgow bought a 215cm August Förster Grand Piano from Peregrine's Pianos in August 2016. It was chosen as a reliable instrument fit for the busy production studios and is used for everything from Mozart to MacMillan! Pictured is Head of Music Derek Clark putting the instrument through its paces. 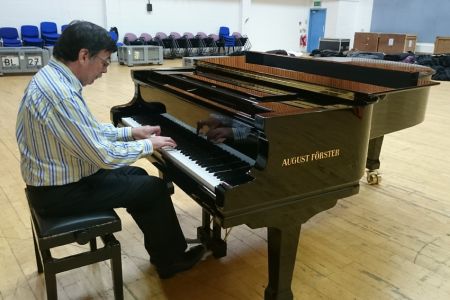 One might note that the great Giacomo Puccini composed two of his masterworks - Tosca and Madame Butterfly - at his August Förster piano. Two historical quotations are also interesting:

“I must say that I am pleased as ever playing your - August Förster – grand piano. It is in points of euphony [melody] truly superior in both bass and descant. Its mechanism allows me to reach all dynamic layers of sound with ease. Also, its tuning keeps very well. I openly congratulate you, Mr Förster, and would like to tell you that you have my highest respect”   Serge Prokofieff, 1937

“The August Förster grand piano used during my last concert tour was a loyal companion to me. It is rich and melodic throughout the whole spectrum of sound and comfortable to play” Richard Strauss, 1864

The Förster Villa in Löbau (pictured above) is a large imposing house built alongside the factory. For many years, up until recently, the building was the home of an arts association that hosted intimate concerts and art exhibitions in the fine recital room. Sylvia, previously working at Peregrine's Pianos, performed several times there! 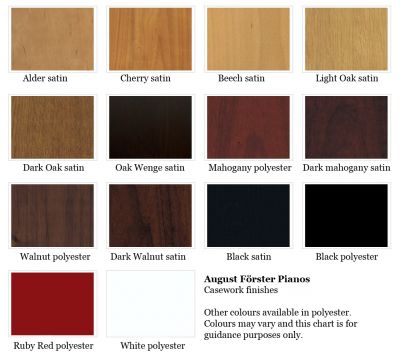 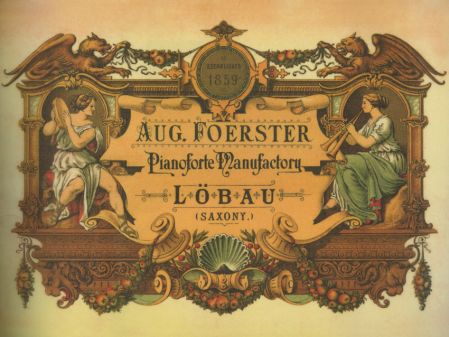 We are currently offering in our showroom a range of the upright pianos and some of the smaller grand pianos. All instruments have a Renner action, three pedals and a matching stool. We can of course supply any instruments from the company and are pleased to discuss any bespoke requirements. The first video below is an introduction to August Förster pianos. The second is a live performance recorded by us on a model 215 grand at the Cosel Palais in Dresden.

For a personal account of the town, its people and the August Förster factory see "Notes from a Small Town (in Germany)" and Sophie Kent's "Personal Impressions."  International Piano Magazine featured a 'behind the scenes at August Förster' article by Dawn Elizabeth Howells (July/August 2014). In February/March 2017 Pianist Magazine ran a three page story about the factory entitled "Travel back in Time."